Taking on the challenge of speaking at a BNI National Conference 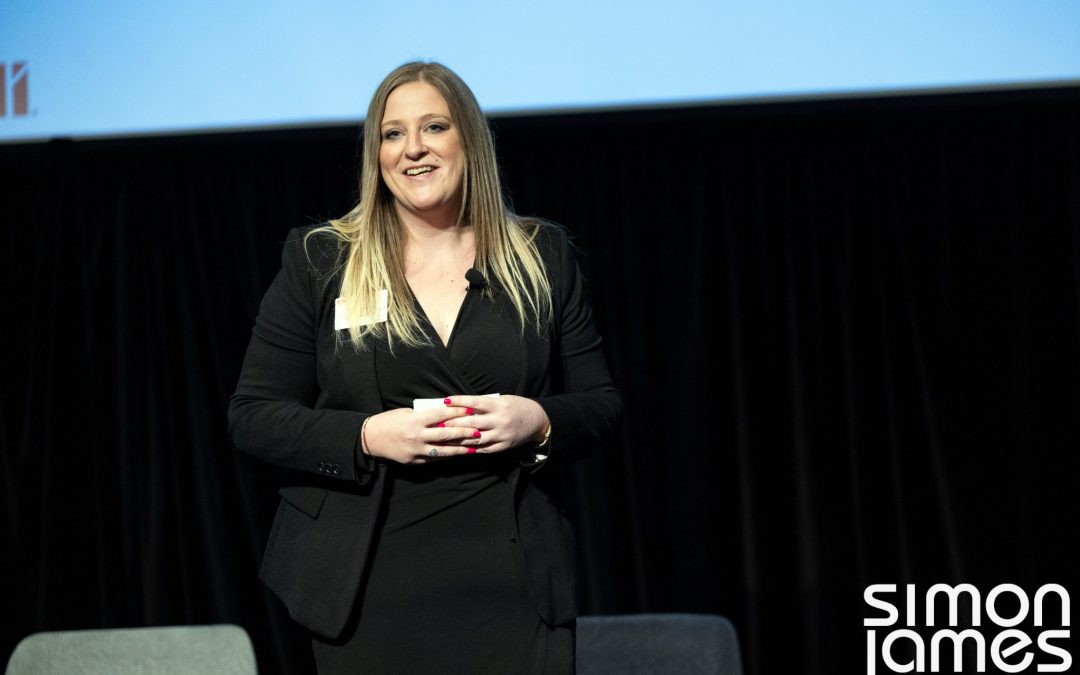 Emma is never one to shy away from a challenge. In fact, she started her Virtual Assistant business during Covid lockdown in 2020 when others were struggling to keep theirs running. We all learned how impressive she is during her BNI The Australian Story Podcast in August of that year.

A gem of an idea of speaking started after seeing the calibre of the speakers at the National Conference in Adelaide.

“I attended the Adelaide National Conference last year and really, really loved the connections. And I thought it was cool that people could stand up and deliver a message.”

She thought how fantastic it would be to stand up in front of hundreds of people and deliver a great message. And so, full of enthusiasm, she confided in BNI Adelaide CBD & South Regional Director, Sonya Noonan. 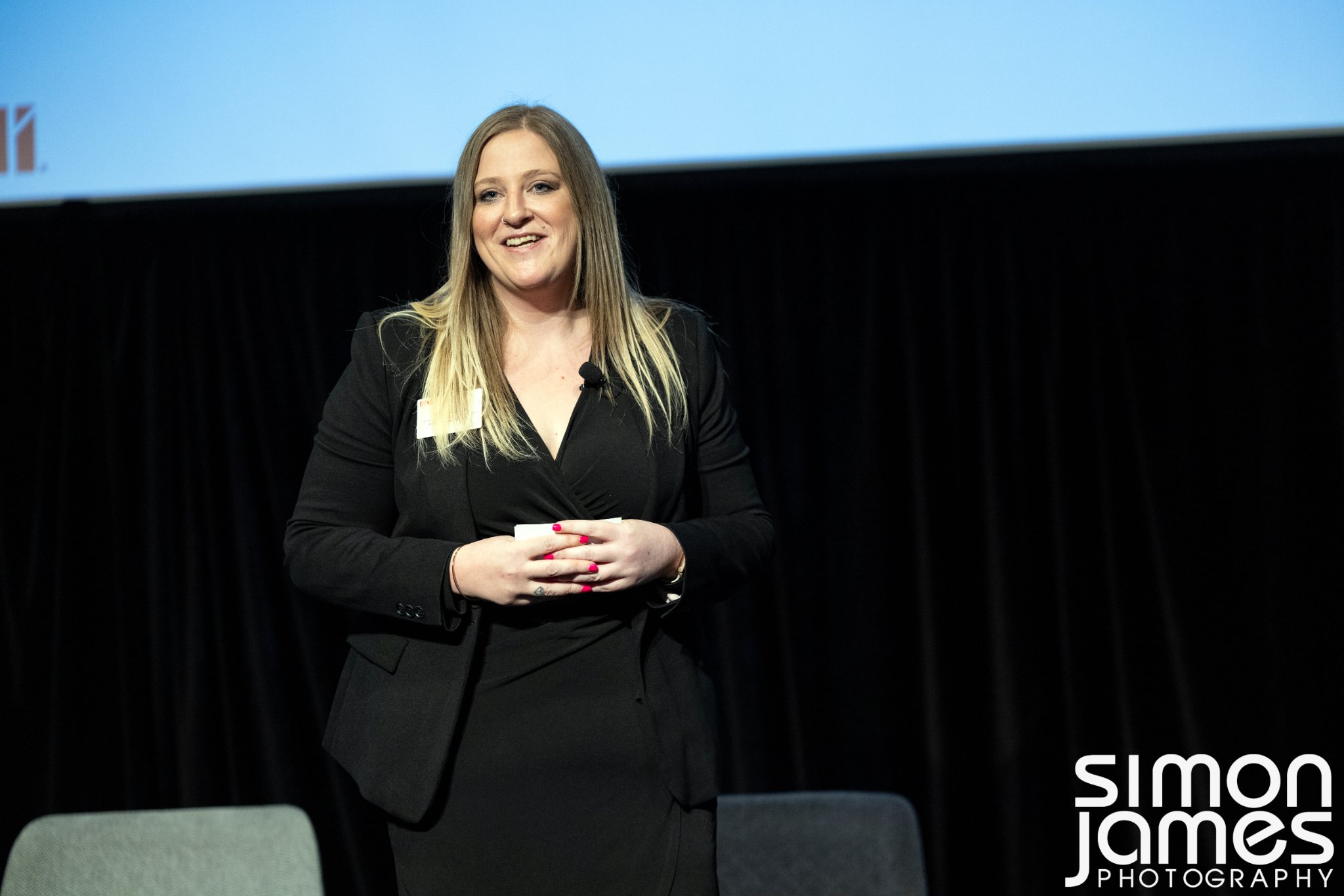 “I’m going to speak at National Conference next year.” Naturally, Sonya asked her, “Okay, what will you talk about?” “I’ve got no idea, but I’m going to,” Emma replied.

And so it was put out to the universe. A few months later, she filled out a nomination form to be a speaker for this year’s conference in [what was supposed to be] Perth.

“I filled it out thinking, I am a little grasshopper in the BNI world. Who’s going to want to hear me speak?”

But fill it out she did, and just a few weeks later, she received an email informing her she had been selected to be a panellist.

When I got the email, I thought, “Holy crap.” I didn’t actually think it was going to happen. And then I thought, “How do I prepare for this? Am I in over my head?””

When the conference moved to Sydney, there was a change in the speakers line up because now some people [especially in WA] couldn’t attend. Emma was told she would now be facilitating a panel with the top performing members of Australia, talking mainly about what they did as the biggest givers gain achievers. Pulling out their stories on things they’ve done and how they’ve inspired people in the BNI world.

“What was really good about this panel was that it was member-focused. We spoke on Member’s Day and had these amazing, incredible international and local speakers deliver their message about their expertise.”

People asked Emma when she was scheduled to speak at the speaker’s dinner the night before. When she told them straight after lunch and received a despondent “Oh”, she knew that she needed to do something to bring everyone out of their post-lunch, full-belly brain fog.

“I thought, no, no, no, not on my watch. I’ve met these people on this panel, and they’ve got some great insights, and they’re really amazing at what they do. I want to make sure that these people are heard and feel the engagement and the energy.” 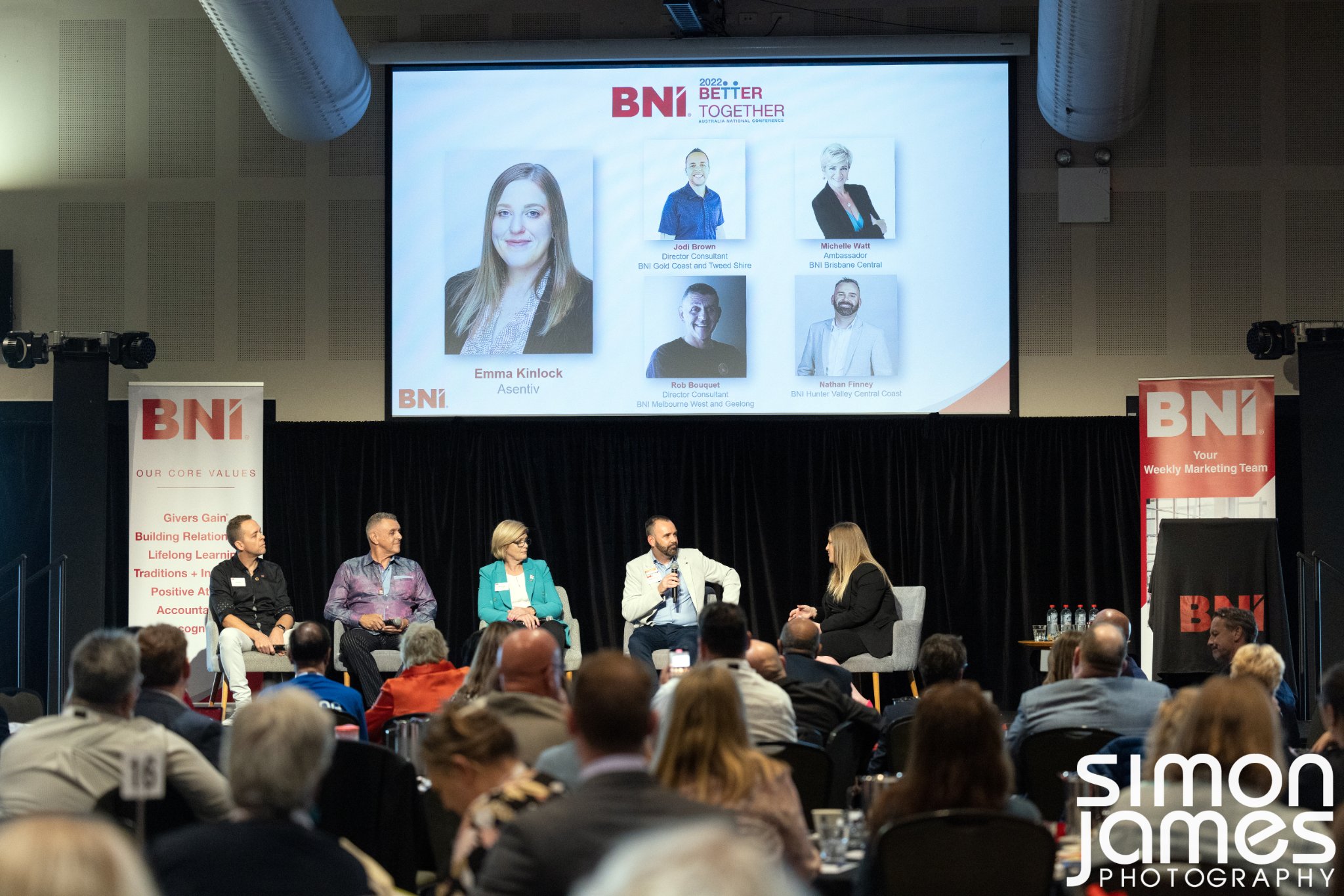 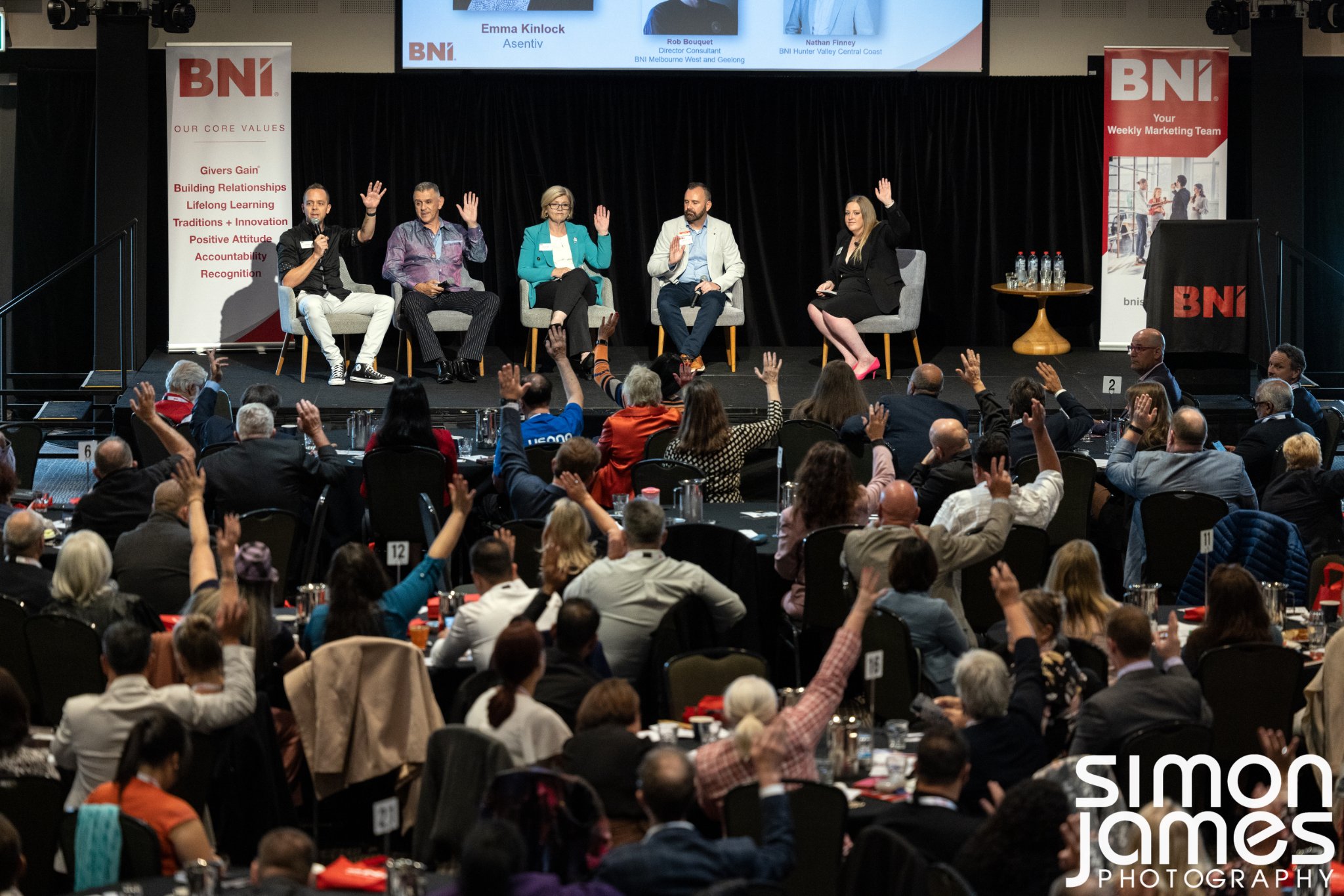 Emma is known for being quirky and thinking outside the box. She came up with a slow clap and a chant for everyone to do. She got everyone up on their feet before she introduced the panellists and had them start a slow clap, and then they added to that, “Panel, panel.” And it got faster and faster and louder and louder, and everyone ended up cheering. Then she asked the audience, “Are you ready for the panels?” and got a massive reaction that kicked off the after lunch discussion. Some people told Emma afterwards that her panel and how she introduced it was the highlight of the National Conference. 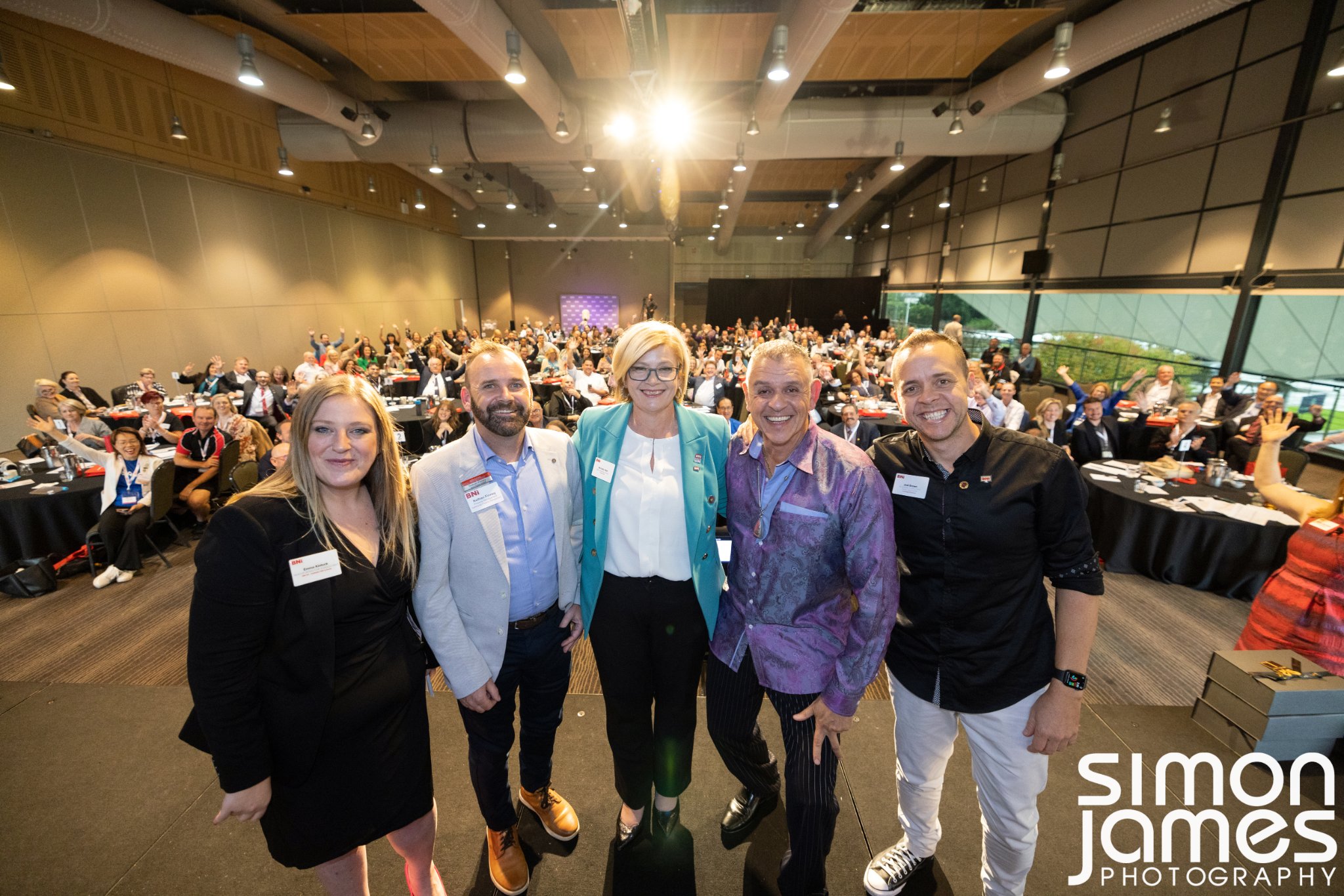 “During the panel, I spoke to some incredible people. People who are number one for inviting visitors that had over 100 visitors with 15 of those joining not just his own chapter, but other chapters as well. There was also one guy who had given, I think it was 2,018 referrals in his membership.”

It was just a great way of talking about the growth, the stories, the inspiration coming from harder places and the different ways you can look at things.

As for the conference itself, Emma found the whole experience incredible.

“It was just so awesome because you literally walk into this conference with all these other BNI members, and you don’t feel out of place. And everyone knows that you’re a BNI member as well. They’re looking at you, and there’s that sense of community. People look at you and smile and say hello. They talk to you like they already know you, and you may not have ever met them before. Because they just know that we are all there for the same thing and everyone was there to be supportive.”

Emma wanted to challenge herself because she believed herself to be a self-conscious person.

“Standing up in front of hundreds of people is not typically something you do when you’re self-conscious. To help myself overcome that, I’ve had to put myself out there. I got to a point where I couldn’t say no. Because I put in that application, they got back to me and said, “You’re doing it.” I thought, “Holy crap, I can’t say no. I’ve booked the flights and accommodation. I can’t say no.” So that’s all I did…not say no.”

And while it all looked effortless up on the big stage, Emma did get to have time with the members beforehand and sort out the structure of the conversation.

“The week before, I met with them all on Zoom and asked them to tell me some questions I could ask each of them on the day. I worked it backwards. Right? So I asked them to think about the message they wanted to leave with the audience. “What can I ask that’ll pop to that story or that message?” That way, they were all prepared for what would come up. Each had three questions, and we had enough time to go through all of them, which was really good. Because we were worried that we might go over and not get to all the questions in our allotted time”

Emma would ad lib a little bit as well. After each panellist spoke, she would contribute to what they’ve just said and make the segue to the next question.

“So there was some ad lib, but I had the questions written down on cue cards. I would frame it up as well. I wouldn’t just say, “So tell me…” I would say, “One thing we may not consider is mindset around visitors. Jodi, can you tell me what your thoughts are on mindset?” So there was a bit of ad-libbing, but it was still very guided.” 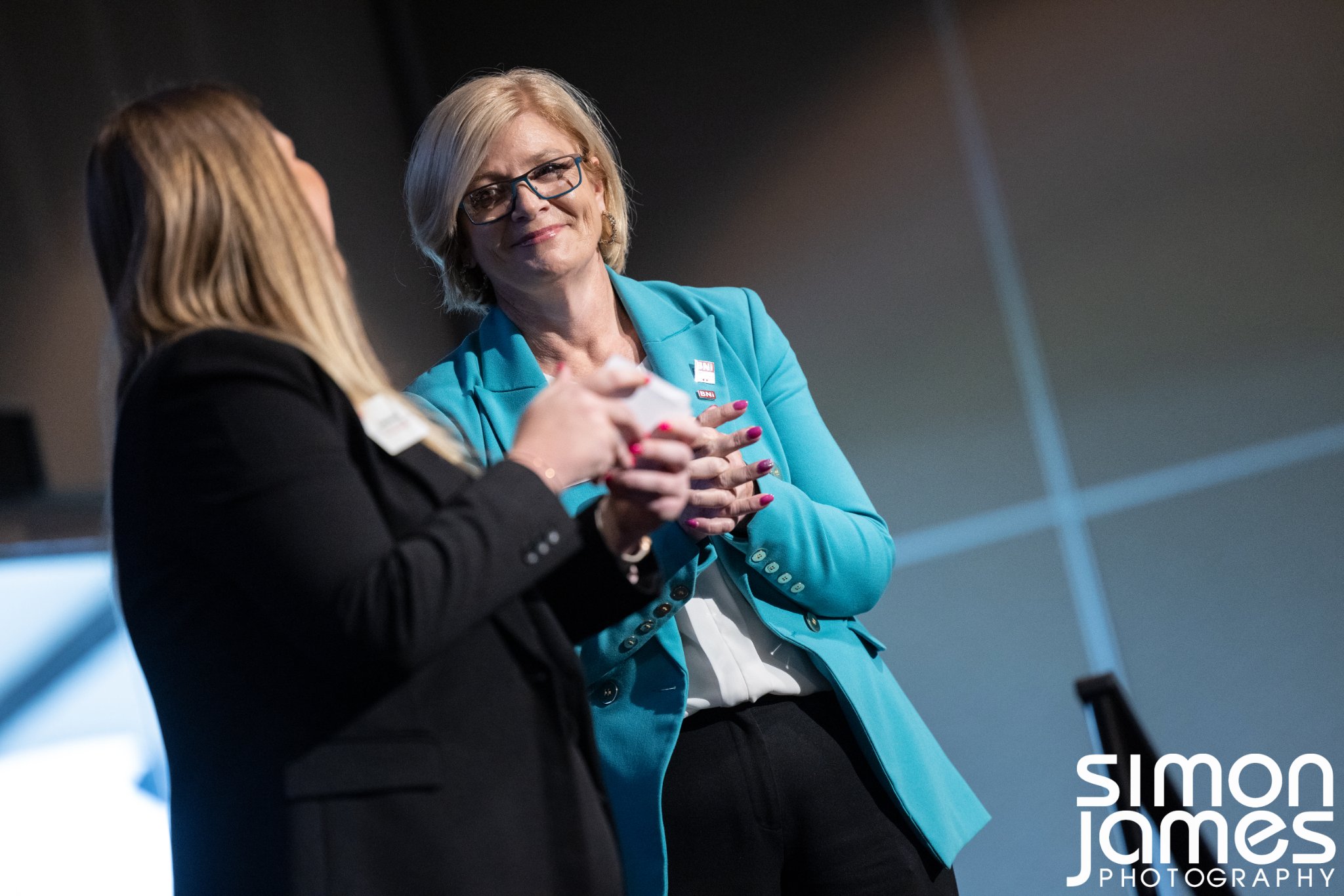 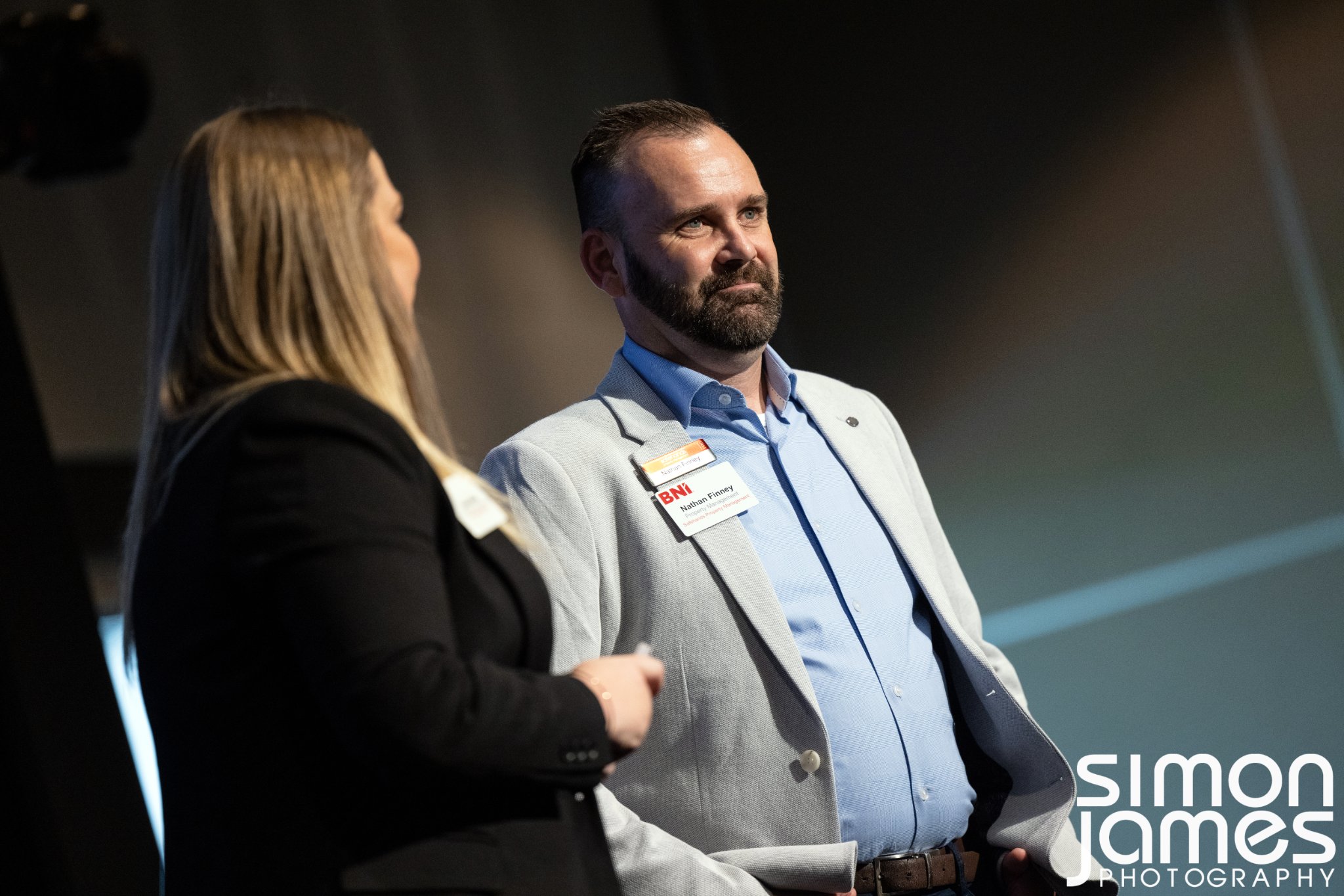 Before the conference shifted to Sydney, Emma’s keynote speech title was ‘Emotional connections through your sales.’ However, after the location moved to Sydney and she was asked to facilitate a panel instead, Emma was somewhat relieved that she actually didn’t have to talk for 45 minutes on her topic as a keynote.

“It worked out well that I didn’t get picked as a keynote speaker or panellist because I could dip my toe in. I can get to that [keynote speaking] later. That’s down the track. But I think facilitating the panel discussion was the perfect thing for me to at least put myself out there and give it a go.”

Speaking in front of 300 or 400 people is out of anyone’s comfort zone, no matter how good a speaker you are. But Emma discovered that she really quite enjoyed it.

“I enjoy it, but it is definitely still outside of my comfort zone at the same time.”

So is there an invitation to come back next year?

“I don’t believe it’s invitation based. I think I’ll have to re-apply. But I’m definitely going to do it again.”